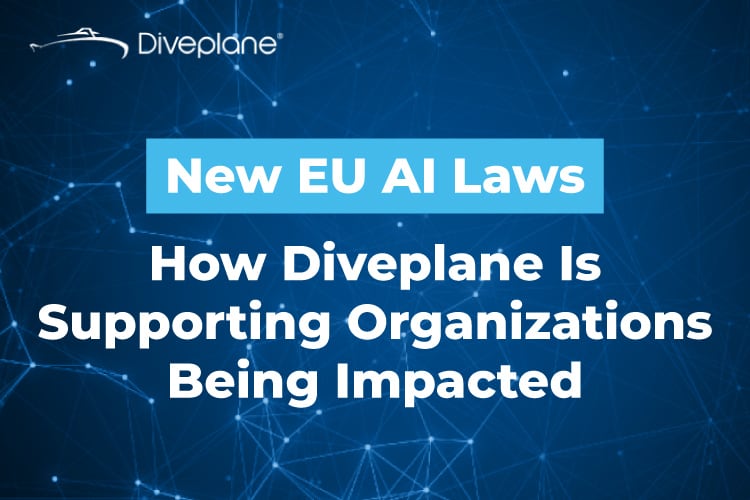 In 2023, the AI EU laws will change. So what does that mean for you as a developer or an everyday organization? Watch this video as Alan breaks down some of the changes, and how Diveplane is ready for those changes.

Artificial intelligence, or AI, is used in just about every algorithm in every system in every organization in some capacity. It’s what helps us navigate and sift through data and information faster. But this data must be true, and for this data to be true, it needs to be ethical and unbiased.

With Diveplane’s operating platform supporting your system, your AI will operate at levels you never thought possible. We offer complete transparency so that your data is true and accurate. Let us help you make your AI work for you. Get in touch with one of our experts today.

EU is going to issue a whole new set of legislation in 2023 that is going to considerably impact every organization that have currently adopted AI.

They’re going to have to, in a nutshell, be able to tell the EU how the AIs is building its decision-making process to ensure that bias doesn’t exist in that data. This is going to be huge. It’s going to be huge for organizations impacted by that, and we’ve already been approached by a number of organizations say, hey, can you guys help with that, and the simple answer is, yes we can, and why?

Because our platform is completely transparent and that’s the key. It’s not a case of just accepting the answer that an AI gives you. You can’t do that anymore. It’s not the right way of doing it. You can say, for example, that a parole board decision is safe unless you can understand on what basis did the AI make that decision, whether or not I get a overdraft compared to my neighbor, whether or not I get medical treatment compared to someone else that lives in a different zip code.

All these questions now, and not just theoretical, the new EU laws will determine that businesses have to be able to say we’re using AI, and the decisions that the AI is making are ethical and non-bias.

So what Diveplane can do with our platform is really support organizations because of the level of transparency because with our platform, you can look inside. You can identify the decision-making process. A lot of people are arguing now, they’re saying, well, actually we’ve solved that because what we’re doing is we’re not giving our data. We’re not giving our AI all the data anymore. We’re deciding, you know, we’re not going to put certain features in the AI, so therefore it can’t be biased.

But actually, what you’ve done at that point is you’ve made your data already biased by making a decision on what features you include and what features you’ve done. And our view is, no, put all the data in because if you’re taking data out and not including it in your decision-making process, you’re kind of really making an excuse for the AI. You’re bending your data to suit the fact that your AI can’t be transparent and can’t tell you why it made a decision. So you’re trying to influence the AI by not including certain data.

And our view is no, put every data feature in there and let our AI come to a prediction, but show you, show you what features have driven the system to make that prediction and enable the human to edit that model to determine, actually I don’t want that feature. It wasn’t adding any value to the decision-making process. Therefore I’m going to exclude it, and just that sheer fact of excluding the data at that point, our platform will audit that and retain that so you know that decisions were made to the model at that particular moment in time.

And the users of our platform can look inside and say, I can see exactly why the AI has made the prediction or the decision that it has because it’s used these data points to make that decision and it’s showing me similar cases and explaining to me the decision-making process. And for me as an AI user, I’d welcome an audit. I wouldn’t be shying away from an audit at that point in time. I’d actually be saying, hey, yeah, come in and see how we’re using AI because you’ve got nothing to hide.

You can demonstrate the transparency, but I think the black box approach now, it is going to be a challenge for people to get around unless they decide to go a different route because they’re not going to be able to prove how, really wholeheartedly, the decisions that the platform is making aren’t based on biased decisions, and I think that’s critical.

I want to as a consumer and as a human being, I’m okay with my data being used to a certain extent, but I want to make sure it’s being used ethically and want to make sure that my neighbors aren’t being excluded from the decision-making process because of some factor that there’s no influence on the decision. But according to the AI, it should do.

So I think organizations now that will embrace understandable AI and transparent AI and ethical AI will be the ones that will stand up as beacons in the industry and say, take a look at us. We’ve got nothing to hide. We want to show you how we use machine-learning and artificial intelligence for good, and that can only be a good thing.